I laugh and say I’m a travel tramp. A new place to see? How soon can we leave? After a holiday is really just the break before the next trip. But a few months ago I was working very very hard to finish my second novel. In my family we’re One-Tracks, and when we’re focused on a project the outside world vanishes. For the first time in our marriage, this year Uwe had to bribe me to go on vacation….

“How about a week on Madeira?” he suggested. “You can write while we’re there. What do you say to a working holiday?”

We were on the island a decade ago, and I liked the idea of returning. A place has a personality. You just can’t talk about the Greek islands or the Tunisia coastline without making mention of the quality of light and blue paint contrasting with whitewashed stairs and walls. My visit to Uwe when he was working in northern Sweden was all about snow and the aurora borealis.

Madeira means verticals. This Portuguese possession is located 520 km (280 nautical miles) from the coast of Africa. It’s lush. Madeira advertises itself as the garden island, and it’s a paradise of vivid flowering plants and trees. 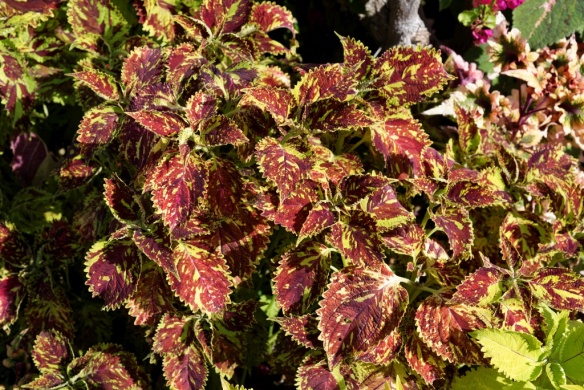 We took the cable cars from the capitol of Funchal up to the various parks and botanical gardens. Later we rented a car and went exploring. Achadas da Cruz (Porto Moniz), population 159, on the northwest corner was a delightful highlight. The fields are down on the waterfront. To reach them the farmers use the cable car known as teleférico, a descent of 500 meters or over 1,500 feet. Prior to the opening of the teleférico in 2004, they made a steep hike of 5 kilometers down to their fields. Now, that’s dedication! 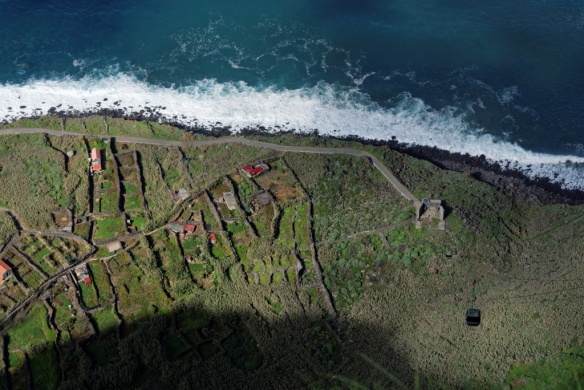 While the teleférico is popular with tourists and costs only 3€ for a one-way trip, the cable car really is used by farmers to transport crops.

Madeira was voted Europe’s Leading Island Destination in 2013. There are ample opportunities for hiking along the traditional water canals known as levadas. The island’s famous for Madeira wine, forests of bay laurels, and black scabbard fish.

The black scabbard or Espada Preta is one ugly fish. It is found only in extremely deep waters like those of Madeira’s coastline. The fish are abundant in waters between 800 and 1300 meters deep; adult fish swim at depths of 200-2000 metres and easily live and feed at substantially greater depths. Almost nothing is known about its life cycle!

A dish of black scabbard and bananas is the island meal (it’s okay. We preferred the fish cooked other ways: with garlic and wine, or in a fish soup, or…) The fish has no scales, and the delicate flesh melts in your mouth no matter how it’s prepared.

NOTES: All photogaphs can be enlarged by simply clicking on the image. More of Uwe’s pictures from Madeira and his photography may be viewed at viewpics.de. For more on the One-Tracks go to: Meet the One-Tracks. Northern Sweden: It Was a Bitterly Cold -22°. My new novel: Tsunami Cowboys.