We flew down to Tunisia for a week in September exactly a year ago. I’d planned to write about Hammamet’s lovely laid back tourist vibe, the gorgeous beaches and how much fun it was viewing the Mediterranean from the Africa coast for the first time.

I didn’t want to obsess on the fact that a few weeks later terrorists shot tourists in a museum down the road from the souk we visited. I definitely don’t want to think about the beach where tourists from around the world were murdered in cold blood this summer. It’s less than 30 kilometers (20 miles) from the hotel we stayed in.

Those cowardly acts have nothing to do with what Uwe and I experienced. I took notes as I sat on our sweet balcony, and here is what I wrote:

“The tourists are international. Every body size and shape, every age is represented. We see groups of Italians, French, Egyptians, Algerians, Germans and Brits. Women in black leggings, head scarves, and long sleeved tunics sit by the pool. Two men (young Arab males) hold hands and spring into the pool at a running jump. Kids run and play everywhere I look. Old folks in wheel chairs are pushed by family members.

The French and Italian tourists live up to their reputations with their rule of remaining poolside until 6 p.m. Then they go to change for dinner at 7.

Lots of Middle East tourists are traditionally dressed in modest clothing. [1] They swim in the ocean fully dressed! But there are also single Arab women in bikinis, or young couples on holiday.”

“Paragliders are pulled by boats, a yacht and sailboat or two glide by, an endless panorama of ocean spreads from left to right. Without talking about it we head past the pool to go down to the lounge chairs under sun umbrellas on the beach. Uwe reads and I edit the manuscript for my second book Tsunami Cowboys. I’m beyond happy: I’m in an exotic locale with fun stuff to notice all around me and I’m doing good writing work. Each afternoon around 4 I stop and swim in the ocean.”

Our hotel was about twenty minutes from the center of Hammamet. 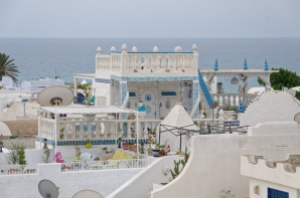 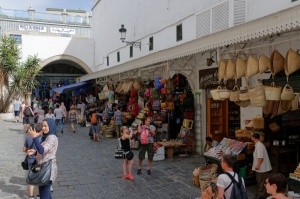 Sometimes we strolled into town for dinner; some nights we had a drink at the hotel and picked one of the restaurants there. We did a couple of tours, to Tunis, Sidi Bou Saïd

and the ancient city of Carthage. [2] 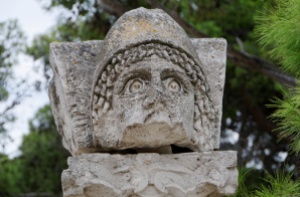 I bargained for sandals at Tunis’ souk [3], 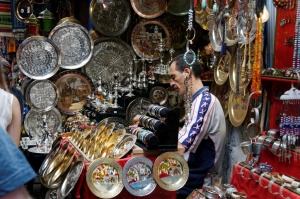 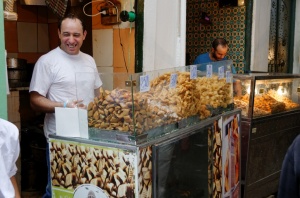 and harissa and couscous spices at an outdoor market.

Touristy? Sure. But here are more of my notes from that week: “Everyone smiles and says hello in the hotel. We’re all here to relax and co-mingle. I have the lovely experience of being welcomed as an American – and when was the last time that’s happened lately – the locals intrigued to learn where I’m from, and even more intrigued to hear that I live in Europe.

I think that’s partly because not many Americans make it to the area, or maybe our hotel books more Europeans and Arabs. Certainly on our charter flight from Germany I’m the only Ami on board! Tunisians are delighted when I assure them that yes, I am enjoying my first visit to their country.”

We learn that Tunisia’s population of 8 million has swelled by an additional 2 million people displaced by wars. Tunisia is a democracy in an unstable part of the world. The Tunisians on the coast are hospitable, curious, worldly. And I want to go back.

I want Tunisia without terrorism.

NOTES: [1] A sign by the pool read “Clothes clog the drains! Bathing suits only, please!” 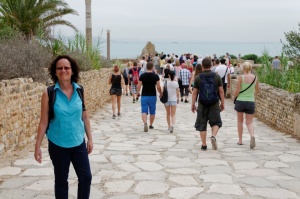 [2] Carthage made the fatal mistake of challenging Rome. The Romans burned it to the ground, killed all the men and sold the women and children into slavery. Then, to make sure everyone got the message that it was a really bad idea to go against Rome, they sowed the area with salt so that nothing would ever grow again….

[3] The shopkeeper held a lighter to the bottom to prove that they were made of camel and not plastic.

Photos Copyright © 2014 Uwe Hartmann. All photographs can be enlarged by simply clicking on the image. More of Uwe’s images from Tunisia and our trips to North Africa and his photography may be viewed at viewpics.de.

19 thoughts on “Tunisia Without Terrorism”